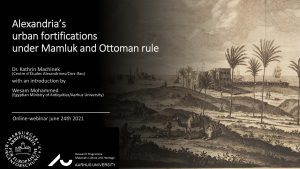 This session from our lecture series “Strongholds of the World” will shed light upon the defense systems of the Mamluk and Ottoman period Alexandria. Alexandria, Egypt’s main seaport on the Mediterranean shore, was often praised by travelers from the past for its impressive fortifications. Nowadays, only few remnants exist of the former urban defense system, the city walls, forts and watchtowers having almost entirely been demolished in the late 19th century by the rapidly expanding modern city. As a coastal border town, medieval Alexandria was constantly a target for enemy invasions, thus the various Islamic rulers kept renovating and modernizing the fortifications. After the disastrous raid of Alexandria by the Cypriots in 1365, the Mamluk sultans repaired the damages and established new strongholds. In 1477, the entrance to the Eastern harbor was secured by a new majestic fortress, constructed on the ruins of the famous ancient lighthouse. After the conquest of Mamluk Egypt by the Ottomans in 1516, Alexandria was located within the territory dominated by the Sublime Porte and therefore less exposed to seaborne attacks. The citizens started to settle outside the city walls between the two harbors and abandoned the old town intra muros. Nevertheless, the Ottoman governors preserved the urban fortifications and added new forts in the harbor zone.

She obtained a Phd in architecture at the Karlsruhe Institute of Technology (KIT), Germany: « The Qaitbay fort in Alexandria – History and Architecture of a Mamluk fortress in the urban defense system of Alexandria »