Skip to content
The Mosaics of Alexandria. Pavements of Greek and Roman Egypt 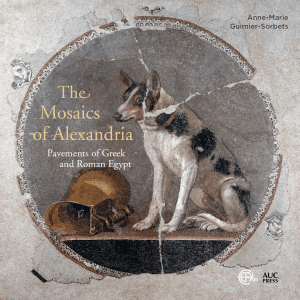 The Mosaics of Alexandria. Pavements of Greek and Roman Egypt

The art of the mosaic was developed by the Greeks, notably within the royal court of Macedonia, and was initially unknown to the Egyptians. Macedonian mosaicists then established busy workshops in the capital, Alexandria, and in the new towns of Greek Egypt. Under the stimulus of commissions from the Ptolemaic court, these workshops soon showed that they were capable of innovation. Beginning with pebbles, they then used tesserae of different sizes, and adopted new materials (glass, faience, paint) in order to transpose onto the floor images from grand paintings, which was the major art form of the time and was characterized by the vivid use of color.
Alexandrian mosaicists were at the forefront of creativity during the Hellenistic period and their influence spread around the Mediterranean. After the Roman conquest of Egypt they adapted to the tastes of their new sponsors and to changes in architecture and were able to retain an important place within this art as it developed across the entire empire, in Rome and from east to west.
The Mosaics of Alexandria provides the first overview of the mosaics and pavements of Egypt that were created between the end of the fourth century BC and the sixth century AD. It presents a selection of some seventy mosaics and pavements from Alexandria and Greco-Roman Egypt. Generally little known and more often than not unpublished, these works are illustrated here in full color, some for the first time. The aim is to better understand the artistic and artisanal production of a type of decoration that played an important role within the living environment of the ancients.

ANNE-MARIE GUIMIER-SORBETS is professor emerita of archaeology and Greek history of art at the University of Paris-Nanterre and a specialist in Greek architecture and architectural décor. In collaboration with the Centre d’Etudes Alexandrines over a period of some twenty-five years, she has authored numerous studies on Alexandrian archaeological material of domestic and funerary contexts. Since 2015, Guimier-Sorbets has served as president of the International Association for the Study of Ancient Mosaics.