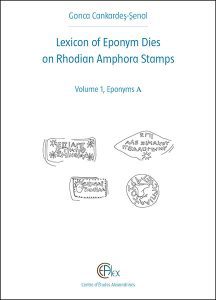 Throughout the Hellenistic Period, from the late 4th to the middle of the 1st century BC, more than 500 producers in Rhodes and the Peraea produced amphorae for transporting Rhodian wine. As an indication that this activity was controlled by the state, they stamped their jars with dies bearing their names and the names of the eponyms who were chosen for one year from among the priests of Helios. The Rhodian amphora stamps found in the archaeological excavations of various consumption centres have been gradually published since the second half of the 19th century and today the number of such items is enormous. This volume contains different dies bearing the names of more than 200 eponyms and is based on the studies of matrices which began in 2003 in the rich Alexandrian collections of the Graeco-Roman Museum, especially the Benaki Collection, and in finds from excavations Some 5,774 dies presented here are from the Alexandrian collections and from archaeological excavations in the city. In addition, the volume contains stamps from excavations of Delos, Crocodilopolis/Arsinoe and other sites in Egypt and some previously published stamps from excavations sites in other Eastern Mediterranean consumption centres. We have established 1,098 eponym-producer associations by means of both published complete amphorae and possible pairs and also stylistic studies of stamps. The stamps are presented in the alphabetical order of the eponyms after a short history of stamp studies and an explanation of matrix studies. In the matrix names, numbers do not refer to any chronological dating order. Under the title of each eponym, following some brief information (the eponymous year of the eponym, total number of matrices naming him, used/not-used month names and the names of the producers associated with him) the stamps naming him are presented, beginning with the dies accompanied by month-names (if applicable) in alphabetical order followed by the dies without month names. In the appendices there are lists containing eponym-producer and producer-eponym associations in alphabetical and chronological order. Additional lists refer to matrices of eponyms accompanied by fabricant matrices seen on the same amphorae and the matrices of secondary stamps accompanying the eponym dies.