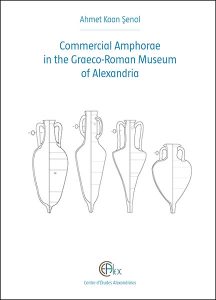 Commercial amphorae in the Graeco-Roman Museum of Alexandria

Excavations undertaken in Alexandria, one of the leading cities in Mediterranean trade during the Hellenistic period, have resulted in a relatively large amount of amphora finds. Five hundred and eighty-eight complete or nearly complete amphorae dating from the beginning of the Hellenistic period to the 7th century ad, of which 457 have been selected for presentation here, are held in Alexandria’s Graeco-Roman Museum and stand as concrete evidence of the commercial networks of the city. Rhodian, Cnidian, Coan, Chian, Mendean, Thasian and Lesbian goods reached Alexandria during the Hellenistic period, as well as goods from Tripolitania, Carthage, the Italian peninsula, Crete, Cyprus and other eastern Mediterranean centres. Under the Pax Romana, commercial activities between Mediterranean cities increased. As a result, many amphorae found in Alexandrian excavations are evidence of Italian, Baetican and Lusitanian trade. Commercial routes then shifted to north and south with the establishment of the new imperial capital in 330 ad. Alexandria provided her needs mostly from eastern Mediterranean centres, especially from the Gazan region in LR 4 amphorae and Cilicia in LR 1 amphorae after the end of the 4th century until the Arab invasion. However, alongside the continued commercial links with Aegean islands and the Italian peninsula, amphora production in Alexandria increased during the imperial period with eventual mass production after the 4th century. This work has enjoyed the financial support of the Union Académique Internationale.