Skip to content
The harbour installations of Lake Mariout in Antiquity 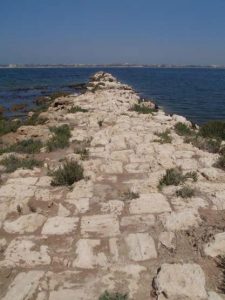 The harbour installations of Lake Mariout in Antiquity

Visio conférence Congrès Entre Mares: location, infrastructures and organization of the roman ports, organisé par The Spanish School of History and Archeology-CSIC and the Provincial Council of Gipuzkoa

The ancient Lake Mareotis, which lay to the south and south-west of Alexandria, became the principal thoroughfare of the region in the Ptolemaic era. After the Roman conquest, the Mariout region flourished greatly and the numerous harbour installations that lined the shores of the lake until the end of the Late Roman period were the result of this process of expansion in the region. The plentiful remains of developments around Lake Mariout, which were still clearly visible some thirty years ago, confirm the existence into antiquity of a large number of small ports. These were essential elements in an efficient and economic transport system for local people and goods that supplied Alexandria’s markets on a daily basis via the city’s lakefront harbour. Lake Mariout, a zone of traffic and exchange, was connected to the Nile by canals, whilst Alexandria’s lakefront harbour was connected to the maritime port of the city by its own canal. Thus, the lake represented an extraordinary highway for merchandise coming from Alexandria’s hinterland, the rest of Egypt, the wealthy province of Cyrenaica to the west. Each installation close to the lake (towns, villages, wealthy agricultural villas, reception facilities for pilgrims, etc.) possessed a harbour, most often developed along a rocky promontory, whose size depended on the activities of the site.

Several types of harbour installations have been revealed on the shores of the Mariout valley.

– Among the enclosed harbours, some are formed by artificial quays and jetties creating a closed basin with one or two controlled entrances. Three sites illustrate this type: the port of Taposiris Magna, which is the largest, the harbour area in the south of the “Marea” Island and the harbour of the site GMR0054 located at 1,6 km to the west.