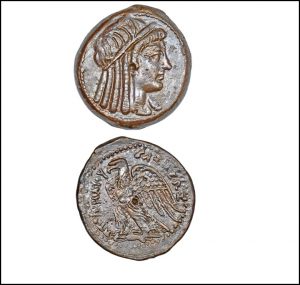 OCMA Conference 2021 : Alexandria and the sea

From the ground of Alexandria, coins have been unearthed since the end of the 19th century. Thousands and thousands of coins have been dug out; unfortunately, the majority of them have not been studied, either because of their state of conservation or the lack of interest of the archaeologists. Nevertheless, large numbers are now cleaned, classified and published. From the French excavations of the Centre d’Etudes Alexandrines, more than 3000 have been recently published, more are on their way to publication. With older excavations, more than 4200 can traced, offering a premium material to study the distribution of coins around the city and to understand its monetization, from the instalment of the first Greeks at the end of the 4th century until the desertification of the city at the end of the late Antiquity.

Andrew Meadows is a specialist in the history, numismatics and epigraphy of the Hellenistic world. From 1995-2007 he was Curator of Greek Coins at the British Museum. In 2007 he became the Margaret Thompson Curator of Greek Coins at the American Numismatic Society (ANS), New York. In 2014 he moved to New College, Oxford and was appointed Professor of Ancient History in the Faculty of Classics and in October 2019  became Director of the Faculty’s Centre for the Study of Ancient Documents.

Visio conférence, The Thursday meetings will be held on Zoom, to join: https://zoom.us/j/91591095059?pwd=R2gyRkk1dkJ6aWUrUWcxTVdlNDM3Zz09