Skip to content
An Egyptian origin for the first pandemic (Justinianic plague)? The burials of “Garage Lux” in Alexandria 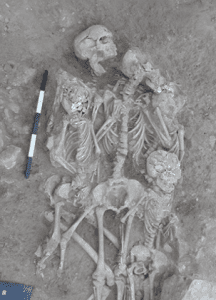 An Egyptian origin for the first pandemic (Justinianic plague)? The burials of “Garage Lux” in Alexandria

The first plague pandemic historically documented is known as the Justinianic plague; its first outbreak seems to have occurred in the Egyptian port of Pelusum in 541 AD. Then it spread around the Mediterranean Basin and was recorded in Byzantium and Western and Northern Europe during the 3-4 following years. Many waves and returns of the same disease are mentioned up to 750-767 AD. Contrary to what is known for the second (beginning with the Black Death from the mid-14th century up to the end of the 18th) and third (contemporary) plague pandemics, the primary historical sources about the first pandemic are limited and many grey areas are persisting nowadays, even if multidisciplinary approaches, with new biological and archaeological data, have recently improved our knowledge. Ancient DNA studies have evidenced that the causal agent of the Justinianic plague was indeed Yersinia pestis, and none of the alleged earlier plagues (pestilencia) have ever been confirmed.
The archaeological sites where “Justinianic plague burials” are evidenced and where Yersinia pestis has been identified are scarce and limited to Western Europe. The scholars are still arguing about the impact of the first pandemic on demographic, social, economic and political changes. But the main point of contention concerns the origin and the transmission routes of the Justinianic plague: population modeling does not fit well with historical records, and biological and genomic data point to an Asiatic origin (either from India, Central Asia or China), when medieval scholars suggest an Egyptian or an Ethiopian first outbreak.
The ongoing study of the cemetery of the site “Garage Lux”, in Alexandria (Egypt), could be part of the answer to that chronological question. Excavations, directed by the CEAlex (Centre d’Études Alexandrines) near the location of the Cesareum in 2000-2002, have yielded a Christian cemetery with around 200 individuals, tentatively dated of the 6th-7th centuries. Simultaneous burials and mass-graves will be described as archaeo-anthropological evidence for a high mortality which could be linked to a plague outbreak, and the global mortality profile will be discussed in relation to typical archaeological plague profiles. The study of the skeletons and of the funerary practices is not achieved, and only a future genomic analysis might identify Yersinia pestis and confirm our working hypothesis seeing Alexandria as a clue for an Egyptian origin, or at least placing Alexandria on the main route of transmission of the first pandemic.