Skip to content
Ivory and bone sculpture in ancient Alexandria 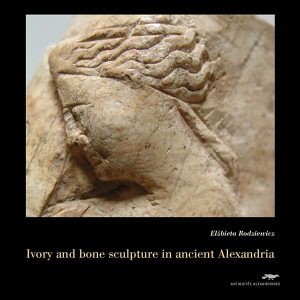 In this second volume in the new series entitled Antiquités Alexandrines, Elzbieta Rodziewicz presents an overview of Alexandrian bone and ivory work by drawing upon her incomparable knowledge of the material that has been unearthed from the excavations of the Polish mission at Kom el-Dikka, as well as the salvage digs of the Centre d’Études Alexandrines in the Brucheion district, the western necropolis and the chora of the city. After examining the vestiges found within the workshops around Street R4 and neighbourhood, she explores the sources of supply—Indian and African elephants, rhinoceros, hippopotamus and other mammals. She reconstitutes the manufacturing techniques and describes the various uses of the material—elements of furniture and boxes, jewellery, tools, games, dolls etc.—, the styles, the traditions and the sometimes sudden changes. From this solid base, she then tracks Alexandrian productions that have been discovered in other sites of the Mediterranean, at Rome, Pompeii, Corinth etc., and in the churches and monasteries of the medieval west that held ornate reliquaries, as well as in the museums of the entire world. Rodziewicz gives us a history of bone and ivory work from the Ptolemaic era up until the first centuries after the Arab conquest in 642.

Elzbieta Rodziewicz holds a doctorate in classical archaeology (Warsaw University) and has been a long-term participant in the Polish excavations at Kom el-Dikka in the centre of Alexandria. For more than twenty years she has been responsible for the study and publication of the bone and ivory material unearthed during the salvage excavations of the Centre d’Études Alexandrines. She is the author of numerous works in this field and her last book was about the bone and ivories discovered in the excavations of Fustat.